Angels are not just metaphors or symbols. Their existence has been proven several times in the Bible, the Old and the New Testaments. They have no bodies but they live to do God’s will. In the Old Testament, angels are messengers for God as they continue to do in the New Testament. Angels are created beings and however close to God and faithful intermediaries they are, with the coming of Christ in the New Testament, they are not equal to Him. 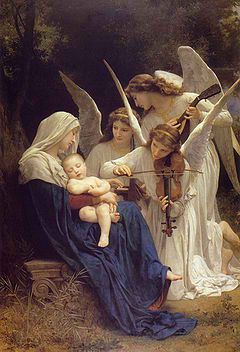 As Christ is God, they do his will. Like superhuman beings, angels descend to earth at God’s behest to intervene in the affairs of humans. They speak, they are seen, they are touched, and sometimes, they even wrestled with. Angels were assigned the role of protecting the new born infant. And when Jesus was to start his journey to Mount Calvary in the Garden of Gethsemane, He chided St. Peter and said to him: “Do you think I cannot appeal to my Father and He will at once send me more than twelve legions of angels?” meaning of course that if He needed protection the way St. Peter intended it, He could easily call on the Angels.

Angels must be light as the clouds and often times we envision them to be walking on them. However, form, with wings included, they are described, the church reminds us that Angels are pure spirits. They have no material bodies and assume any appearance that God commands them after which time they return to immateriality. Considering their immateriality, they are thought to be eight choirs of them. St. Thomas Aquinas ranked them in descending order of seraphims, cherubims, thrones, dominations (dominions), virtues, powers, principalities, archangels, and angels. Angels are also intellectually superior to human beings and because they do not have material bodies, their emotions lack the “feelings” of human beings although they are capable of loving.